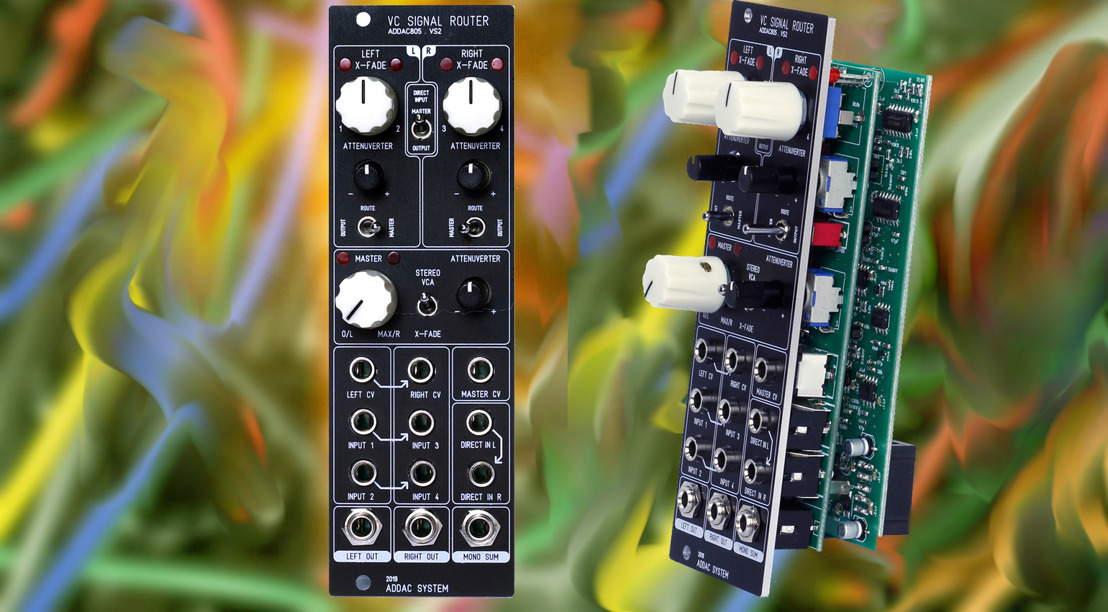 Lisbon, Portugal, December 20, 2019 — ADDAC System has announced availability of its new 805 VC Signal Router. While taking up just 8hp of space and priced at €160, the VC Signal Router is an economical way to add significant dimension and new signal flow options to just about any modular set up. ​

Inspired by ADDAC System's 701 VCO waveform mixing section, the new VC Signal Router also updates the company's legacy X-Fade/Panner to a stereo configuration that also allows four quadrant mixing. This feature is achieved by using the stereo Master knob as an X-fader between the left and right channels. By plugging in the four audio sources and sweep/crossfade between any of them using the three combined X-faders, users can plug any four sources (for instance, four waveforms of a VCO, four LFOs, four envelopes) —  then sweep, morph or mix them to their heart's content.

"Our VC Signal Router builds on some basic mixing principles derived from our 701 VCO waveform mixing section, while bringing in a new dimension of sound placement possibilities," said André Gonçalves, founder of ADDAC System. "Even though the 805 requires a relatively small investment. four quadrant mixing can add a glacial effect to just about any soundscape."

A peculiar signal flow meant to inspire
​The VC Signal Router features two dedicated X-faders and a stereo VCA that can also be used as a third X-Fader. All controls have their own CV inputs and dedicated Attenuverters for precision control. Left and Right X-fader channels can also be routed through the Master stereo VCA or sent directly to the outputs. Further, a stereo Direct input can also be routed through the Master VCA or sent straight to the outputs.
​
​The Mono Sum output always mixes Left and Right outputs together, allowing users with the possibility of using the module as a peculiar six channel mono mixer. It can be used for both Audio or CV Signals.